HISTORY: The earliest report of coccidia in cats was probably given by Finck in 1854 (Wenyon, 1923; Shah, 1970a) who described stages in the villi of cats as corpusclesgemines. Wenyon (1923) indicates that these stages were in the lamina propria and not in the enterocytes as were I. felis and I. rivolta. The subepithelial location would indicate that these parasites were a Sarcocystis species. The oocysts of I. felis (large size) and I. rivolta (medium size) found in cats closely resemble the oocysts of I. canis (large size) and I. ohioensis-like (medium size) organisms observed in the feces of dogs (Lindsay and Blagburn, 1991). During the first half of this century dogs and cats were thought to share the same species of coccidia. Nesmeséri (1960) demonstrated that I. felis from cats was not transmissible to dogs and named the canine parasite I. canis. Shah (1970a) latter confirmed these findings. Several researchers were unable to produce patent infections in dogs with I. rivolta oocysts isolated from cats (Pellérdy, 1974; Dubey et al., 1970a, Dubey, 1975a) or in cats with I. rivolta oocysts isolated from dogs (Dubey, 1975a). Based on the results of these studies I. rivolta was retained for the species in cats and the species in dogs was named I. ohioensis (Dubey, 1975a).

In the early 1970's, researchers demonstrated that oocysts of I. felis and I. rivolta would excyst in mice and the sporozoites would invade mesenteric lymph nodes and other extraintestinal sites (Frenkel and Dubey, 1972). These encysted stages are infectious when fed to cats and result in oocyst production.

GEOGRAPHIC DISTRIBUTION:Isospora felis is found worldwide where cats are present.

Paratenic hosts: In these hosts, sporozoites can persist within varioius cells in the lymphatic system of the peritoneal cavity.

PARASITE IDENTIFICATION: Oocysts measure 38-51 by 27-39 μm (mean: 41.6 by 30.5 μm) (Shah, 1970a) ((Fig. 1-1). The length width ratio is 1.3-1.4 (mean: 1.35). The oocysts of Isosporafelis are the largest of the coccidial oocysts observed in cats (Table 3). No micropyle is present. Inclusions (hazy bodies) may be observed between the sporont and oocyst wall in freshly excreted oocysts. The hazy bodies degenerate as the oocysts sporulate. No oocyst residuum is present in sporulated oocysts. Sporulated oocysts contain 2 sporocysts (Fig.1-2). Sporocysts measure 20-26 by 17-22 μm (mean, 22.6 by 18.4 μm), contain a sporocyst residuum, and 4 sporozoites but no Steida body. The sporocyst residuum is granular and may contain refractile globules. Sporozoites are 10-15 μm long, lie lengthwise in the sporocyst, contain a single nucleus and a refractile globule. Occasionally a sporulated I. felis oocyst will be observed that is Caryospora-like having a single sporocyst that contains 8 sporozoites (Shah, 1970a).

Mice (Mus musculus), Norway rats (Rattus norvegicus), golden hamsters (Mesocricetus auratus), cows (Bos taurus), and dogs (Canis familiaris) can serve as paratenic hosts (Dubey, 1975; Dubey and Frenkel, 1972; Fayer and Frenkel, 1979; Frenkel and Dubey, 1972; Wolters et al., 1980). The sporozoite present in the tissues of these hosts are infective to cats if they are ingested.

CLINICAL PRESENTATION AND PATHOGENESIS: Experimental studies indicate that I. felis is moderately pathogenic for 6-week-old to 13-week-old kittens given 1 to 1.5 x 105 oocysts. Soft, mucoid, feces is observed in kittens 8 days after infection but servere disease does not occur. Microscopic lesions in kittens examined early in infection (about 6 days after being given oocysts) are mild and consist of erosion of the superficial epithelial cells. In kittens examined later in the infection (7 to 9 days after infection) congestion, mild neutrophilic infiltration, and hypersecretion of the mucosa are observed (Shah, 1971). Additionally, epithelial hyperplasia was also noted in some kittens. Isospora felis is more pathogenic for younger kittens. Four-week-old kittens may develop severe disease characterized by signs of enteritis, emaciation and death if given 1 x 105 oocysts (Andrews, 1926).

No signs of disease are seen in paratenic hosts.

TREATMENT: Coccidiosis in cats can be treated with various sulfonamides and quinacrine (Table 4)

EPIZOOTIOLOGY: Cats are very commonly infected with this parasite. It is unclear whether cats are infected more commonly by oocysts or by the ingestion of paratenic hosts.

HAZARDS TO OTHER ANIMALS: None known.

HAZARDS TO HUMANS: It is possible that humans could serve as paratenic hosts. No recorded cases of human infection exist.

Ferguson DJP, Birch-Anderson A, Hutchinson WM, and Siim JC. 1980b. Ultrastructural observations on microgametogenesis and the structure of the microgamete of Isosporafelis. Acta Path Microbiol Scand B 88:151-159.

Mehlhorn, H. 1976. Electron microscopy of stages of Isospora felis of the cat in the mesenteric lymph node of the mouse. Z. Parasitenk. 51:15-24.

Figure 1-1. Isospora felis. Oocysts passed in the feces of a naturally infected cat. 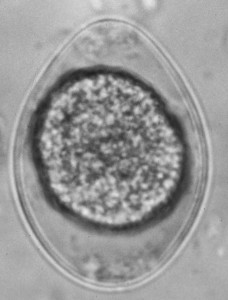 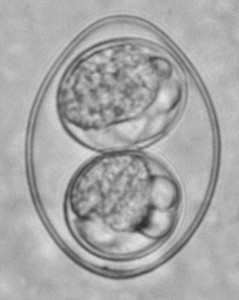