Fasciolopsis buski is a very large fluke that lives in the small intestine of humans and pigs in various Southeast Asian countries and China.  This fluke has also been found in people in Hawaii.  The eggs are very similar to those of the large liver fluke, Fasciola hepatica, which makes the diagnosis based on eggs in the feces quite difficult.

Fasciolopsis buski has a life cycle that does not require the ingestion of a host by the human final host.  The eggs that are shed in the feces are unembryonated when passed.  Only after they are deposited in warm water will they mature to the miracidial, stage, which is ready to hatch.  This takes about three to seven weeks at tropical temperatures.  The hatched miracidium has a pair of eyespots and it swims about until it comes in contact with the snail hosts that are small planorbid snails including the genera Segmentina, Hippeutis, Polypilus, and Gyraulus.  In these snails, the miracidium develops into a sporocyst, in which develop rediae.  Within the rediae, a second redial generation is produced.  The second redial generation produces cercariae that have long and powerful tails with which they leave the snail.  The cercariae swim about until they make contact with vegetation.  They then will encyst upon the vegetation by the extrusion of wall forming material from glands that empty near the mouth.  Humans become infected when they ingest the metacercarial cyst stage.

The typical means by which humans become infected is by the peeling of fresh buffalo nuts (Trapa natan and Trapa bicornis) or water chestnuts (Eliocharis tuberosa) with their teeth and the accidental ingestion of the contaminating metacercaria.  Other plants from which infections can be acquired include the lotus, water baboo, and almost any other aquatic plant that is consumed raw and grown in an endemic area.  In the human host, the fluke emerges from the metacercaria cyst in the small intestine.  The young fluke then attaches to the intestinal wall by means of its ventral sucker and grows over the next three months into the large adult fluke.  These large flukes live in the duodenum and jejunum and are 2.5 to 7.5 cm long and up to 1 to 2 cm wide. 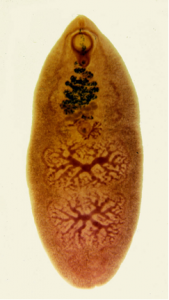 An infection with only a few of these trematodes can often go unnoticed or will produce only minimal symptoms.  Cases can occur where there may be many to hundreds of these parasites present, causing problems with digestion or even intestinal obstruction.  Infection with this lumen dwelling trematode can cause eosinophilia in the infected person.  Also, it appears that there is some reaction to the fluke or products produced by the fluke that result in edema of the tissues of the face of the infected individual, especially around the eyes.  However, other tissues can also be affected.

This infection tends to occur most commonly in areas where the aquatic plants are farmed, where pigs are farmed, and where human excrement is used to fertilize the aquatic plant crops.  Pig excrement can also serve as a source of eggs that can contaminate the environment.  Treatment of the waste with a process such as composting would destroy the eggs, as should many other processes.  These eggs are nowhere near as resistant to various disinfection methods as are the eggs of many of the nematode and tapeworm parasites.

Infections with this trematode can be treated with either albendazole or with praziquantel.  The disease can be prevented by boiling vegetables before they are eaten or by carefully peeling them with fingers and utensils.  It is also possible to kill the metacercarial stages on the vegetables by soaking the vegetables a few minutes in an aqueous solution of metallic iodine with the color of weak iced tea.  This will darken the cut edges of the vegetables, but will not harm either their flavor or make them harmful to ingest.